A Quiet Revolution in Harmonic Theory

In my young day, your first lesson in jazz harmony was the so-called scale-tone seventh chords. This was the basis of the John Mehegan method back in the fifties. You just piled up your thirds on each note of the scale using only notes belonging to the scale, and this is what you got:

What this did not mean, was that you were supposed to harmonize a scale passage using a sequence of those chords. There is such a thing as harmonic pace, which in its simplest form means that you change chord at the beginning of each measure, or halfway through one. This is pretty general in all songs except Burt Bacharach’s A House is not a Home, which always requires two extra hours of rehearsal.

So how did you square a scale passage that might fit inside a measure, with a chord that lasts the whole measure? Well, if you were a guitarist singing it, you do just that. Hold down the chord and sing the scale passage over it.

If, however, you were scoring it for four saxophones, or three trumpets and a trombone, and you wanted the horns to move together to add “thickness” to the line (aka “parallel-motion homophony” to the initiated) there was a simple rule of thumb used by everyone from Duke Ellington to George Shearing :

And this was how it was taught until veteran jazz pianist and teacher Barry Harris came along and made it all much more elegant.

The first thing he noticed is that the C major 7th chord (4 3 4) is not the home chord of the C scale. It sounds tense. That major seventh wants to resolve down to the sixth (4 3 2). Hmm, now doesn’t that sound better?

The second thing is that all those diminished chords would contain three notes that belonged to the scale plus a fourth note (snuggling between the fifth and the sixth in the case of the tonic chord.)

What to do with that extra “chromatic” note? The traditional answer was to call it a passing note, placed there to keep the parallel movement moving in all parts.

Barry’s solution was simpler. He simply added the “passing” note to the scale, making it an eight note scale. This discovery was not just a change of name. It allows pianists to generate new harmonies for much of the jazz repertoire, and works both for parallel and contrary motion. Note that it doesn’t have to add notes to the melody that weren’t there before.

For lovers of theory, that extra note between the 5th and the 6th becomes the new 6th, making the 6th the new 7th. Here is what the new harmony looks like for added-sixth chords in tonic, subdominant and dominant (I, IV and V) position in C major: 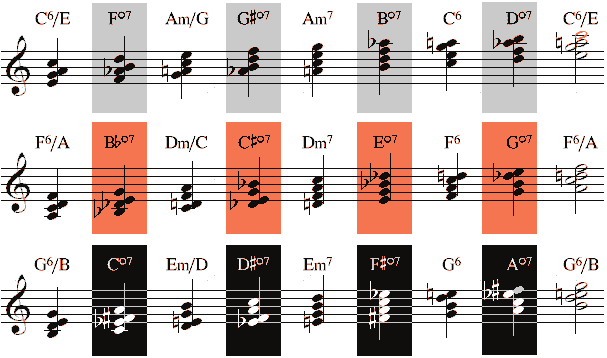 You can watch hours of Barry Harris’s piano workshops on YouTube to see young players twisting their fingers in knots as they try to assimilate this elegant knowledge into their technique on that glaring anachronism, the traditional piano keyboard. And we haven’t even mentioned the flattened fifth and dominant seventh harmonies yet.

Which all brings me round to Roy Pertchik’s patented TriChromatic system, combining a chromatic keyboard layout with three colours in rotation, seen here in his double-wholetone-row vibraphone. (I’ve taken the liberty of using his choice of colours in my diagram, above.)  Here is his introduction to the instrument:

For the complete exposé, here he is explaining it at Stanford University.

I hope to persuade Roy to write a post for this blog to tell us how his double wholetone keyboard has helped him explore music. In my quest for an instrument that truly maps the territory I am curious to know if this particular mapping is useful for all styles and tastes.

I, for one, certainly like the sound of it.

3 Responses to A Quiet Revolution in Harmonic Theory