Why Montessori Bells Get it Wrong (2)

“Why are those ones black?”

The little girl was four years old and had asked the one question I couldn’t answer in a way she could understand.

I wanted to see how children used these Montessori bells and what could be done with them.  I had three hours in a local Montessori school to find out. I wanted to know, for instance, if children could sort them into order of pitch. So I began by shuffling them. 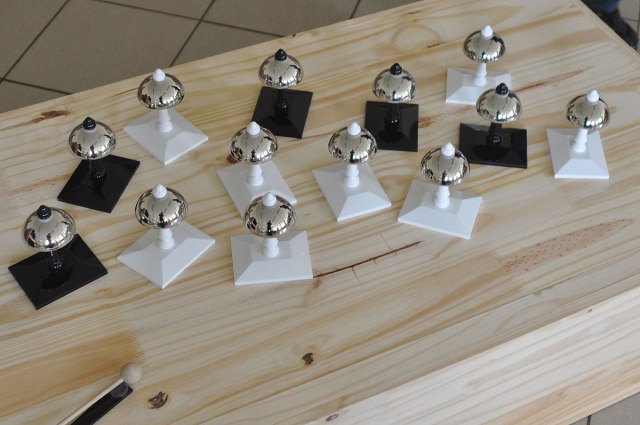 The classroom was a wall-to-wall environment of competing attractions for 3 to 6-year-olds, with activities involving splashing water topping the popularity scale, followed by picture tracing using the window as a light-box. The bells sitting on their shelf did not seem to be getting much attention. Or, in fact, any.

We laid the one empty one shelf unit on its front to make the bells easier to reach for the little ones, and I sat behind picking out tunes on them to see if I could draw an audience. One thing you don’t do in a Montessori classroom is corral the kids into an activity they don’t care for.

The first thing you notice with these bells, which cost and arm and a leg, is that they are not really created for producing melody. Their decay is so long that a damper is provided which you hold in your other hand. If you try to play a melody without using the damper, the notes coalesce into a shrill throbbing mini-cacophony.

The school principal explained that indeed that the bells are intended to give children the sensory experience of sound rather than turn them into musical prodigies. I thought Tibetan singing bowls would do that better, cheaper, and in a lower register easier on the ear.

I noticed she corrected the girls on how to strike the bells, by limply dangling the beater and swinging it at the edge of the bell. I wondered why they were stored on such a high shelf if that were the case.

Lacking takers for my challenge I ended up having to place the bells in order myself and offered to accompany any child who wanted to come and sing something.

One very forward little girl came and gave a charming rendition of the first line of Au clair de la lune in D-flat. I showed her where the notes were (the first three in the top row above) but she didn’t seem to think this information was intended for her and simply repeated the extract.

The control side of the experiment was provided by the arrival of a balafon (African xylophone) brought in by the teaching assistant. The children crowded around this and kept coming back to it throughout our “workshop” session. I lost count of the number of times I was asked to rewind the rubber onto the beaters.

They also competed with each other to get notes out of my plastic panpipes, some with remarkable success. One six-year-old wanted lessons on them.

But they really couldn’t be bothered with the bells.

I don’t know if they didn’t like the sound, or didn’t like being told how to hold the beater, or maybe they were already so familiar with them that they simply didn’t need to try them any more.

One thing I found curious was the way they were stored.

I don’t know if this is general practice, but relegating black notes to the shelf below makes me wonder: why have them at all?

But I covered all that ground in my first post on this subject.

Many of Maria Montessori’s principles have been handed down unchanged since she died in 1952. Her educational outlook grew out of her experience with retarded and delinquent children and bears the stamp of the scientific prism through which she saw the world. And today, as brand franchisees, Montessori educators are in some sense bound to take on board her highly schematic views on child development as gospel.

The school equipment is a major part of this tradition. But you could be forgiven for thinking the closest Maria Montessori ever got to a musical experience was the Helmholtz resonators in a physics laboratory. Reducing music to “sensory exploration” ignores a fat chunk of what music is about.

A thought: maybe the bells weren’t meant to be about music at all. In which case – why are those ones black?

I’m grateful to my friend Maud for the opportunity to meet the children and get a better idea of what goes on in her generously equipped school.

2 Responses to Why Montessori Bells Get it Wrong (2)