I love listening to bouzouki players, especially when they improvise those rubato introductions to songs called taxim. They seem to be cramming semitones and augmented seconds wherever the fancy takes them.

It wasn’t till I started playing some Greek pieces myself, for a gig with a Bulgarian singer, that I realized there was some method in the madness.

Let’s look at the second half of a composition by Stavros Xarhakos called Horos tou Sakena. I’ve transcribed it the way it’s usually played, with all the grace notes. 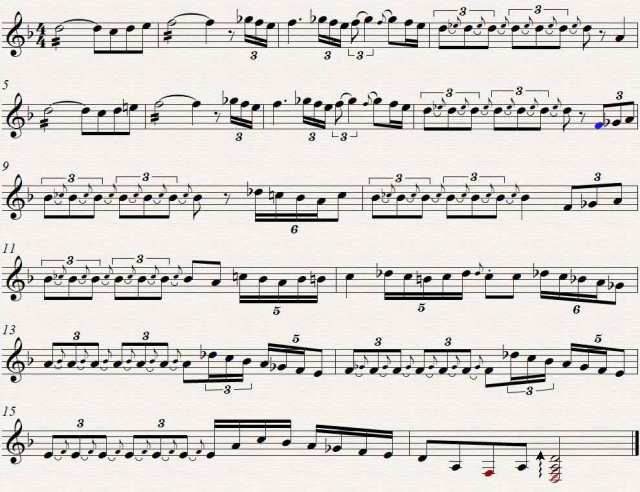 Note that all the grace notes after the repeated notes are up a semitone, which is normal, as they serve merely for articulation, rather than acting as scale tones.

But when we look at the scale, we find a D minor with a lowered fourth, and two sevenths. In MOVES notation this gives (starting from D):

Note that I haven’t completed the octave to the upper D, because the melody doesn’t do that either. Try continuing up to D and you see its spoils the effect of the scale – which to my ears is all about reaching for the unattainable.

The Greeks have a name for this scale, sampah pronounced sabakh, though they list it (on bouzoukispot.com) with a top D and no Db. Apparently, diminished fourths are allowed, but the line has to be drawn at diminished octaves!

Olivier Messiaen might have classed this as a defective form of his third mode of limited transposition (2 1 1 2 1 1 2 1 1) , on account of the missing G#, and would probably pencil in a top D to keep things tidy.

What do you think? You can listen to the whole tune in this bouzouki lesson video:

The part I have transcribed begins at 0:46.  Enjoy!

jazz panpipe pioneer and designer
View all posts by jazzpanflute →
This entry was posted in Uncategorized. Bookmark the permalink.