Why can’t music learning be as simple as LEGO?

Posted on December 8, 2014 by jazzpanflute

The other day my 6-year-old son decided he wanted to get rid of all his toys, except his LEGO.

Not quite. When the moment came to pack them up, he decided he couldn’t part with his Bakugan brawlers either. You know, those balls that spring open to become threatening beasts when thrown.

So I ask: what is so captivating about LEGO and can we build that quality into music learning? How can we make music-learning a process of self-discovery and creativity by offering the right kind of building blocks?

The blocks need to be colorful, easy to manipulate, and must not intimidate.

Are you sleeping, Brother John? 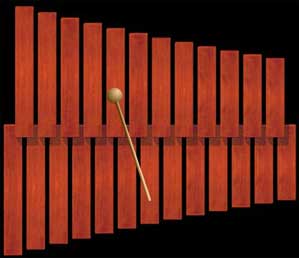 My son wanted to show me he had worked out how to play Frère Jacques on the wholetone xylophone. He proudly kept repeating the first three notes – Do-Re-Mi – in a cycle. If you know the tune (how could you not?) you will remember that it is the first four notes that repeat, like so:

There was no way I could get him to understand the “mistake” by demonstrating how it should be played. Making him sing the lyrics worked as long as he sang it, but as soon as he got back to the instrument the three-note cycle reappeared.

Putting that aside, I showed him how to play the next phrase of the song, Mi-Fa-Sol, Mi-Fa-Sol, to the words: dormez-vous? dormez-vous? To get the semitone from Mi to Fa on the double-wholetone-row xylophone, you need to cross from one wholetone row to the other.

To my surprise he had no difficulty crossing over to the back row, and since the phrase was already a 3-note phrase, that was no problem either. Except that he omitted to give the last note (on “vous“) double the length.

Evidently three-note figures are a winner. I wasn’t able to get him to chain up the two building blocks to make the first half of the tune, and unfortunately some of my frustration rubbed off onto him, and he lost his urge to carry on.

Not as good as Lego, he seemed to think.

That got me thinking about our different mental frames, to try to understand where he was coming from.

I had a pre-programmed idea of the whole of the tune he was trying to play. I was judging his performance on how well it measured up to the tune that I knew. Whereas he had acquired this three-note brick and was trying to use it to build the tune. And like LEGO, the brick didn’t need to be an exact representation of anything.

He happily accepted a second three-note brick to build the next part of the tune, and stacked that without regard for the rhythm.

So my question is: should we expect children to learn music by reproducing tunes correctly? After all, we don’t demand that they draw lifelike portraits instead of stick figures. So what’s so different about music?

Had I been able to understand that he needed to play with those 3-note bricks and test them to see what he could build with them, we might have found common ground.

I have never been a lover of scale practice. I have been told by accomplished musicians that you get to like – yea  – love it, as you get better at it. This kind of advice resembles the hard sell that people who run ten miles daily tend to use, and on me, is just about as effective.

My take on scales is that they are artefacts obtained by taking a chunk of music and hanging up all the notes in that chunk, in order of pitch. More like a table of contents than the book itself. When overused in music they become a form of conceptual pollution.

Because scales usually require an entire childhood to master and build the right muscles, teachers are tempted to start imposing them at the child’s first display of interest in playing the piano, so as not to lose time or install those dreaded “bad habits”. Those who don’t respond to this treatment are quietly dropped as unsuitable.

But a good question is who drops who? When I ask people why they gave up piano the commonest reason is: the teacher I had.

More on this to follow. Send me your ideas in the comments below, or on Twitter to @jazzpanflute.