Have you ever noticed in Karaoke bars when a singer takes the microphone and it starts howling, the ones that don’t know try to cover the mike with their hand and the feedback gets worse? Their hand forms an acoustic cavity and creates a bandpass or “notch” filter that only encourages the feedback loop. Or something like that.

I remember this phenomenon being used by the sax player in a Fairport Convention concert some 40-odd years ago, when he placed his soprano sax over the microphone that picked up the horn’s frequencies with commendably manic zeal.

The idea of making a passive organ to be played with a microphone has been at the back of my mind since then. A rubber cowl, or the player’s hand over the microphone could modulate the frequency to make it more of an artistic experience, recreating some of the nostalgic sounds of the Battle of Britain.

When I was in Spain I experimented with a flexible shoe organ that used a honeycomb layout. Major or minor triads could be obtained by hitting three neighboring tubes. 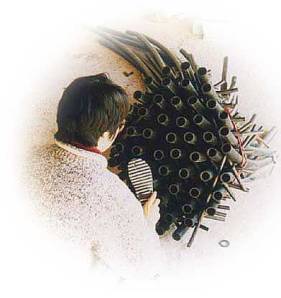 With a pair of shoes, most jazz chords could be obtained. Amuse yourself for a while here.

Some time later, by changing the axes of the honeycomb, I came up with a layout that gives a triad, minor or major, on every apex at the join of three tubes.

I first made this as a portable bundle of closed pipes hoping to be able to play it as a panpipe, but my chin got in the way. Blowing through flexible tube just made me dizzy. It ended up in the garden as an Aeolian harp, and was quickly inhabited by small creatures.

So I now bring you the latest evolution of all this research, the 4-octave Honeycomium chromatic chordal passive lap organ, to be played with one or more microphones.

It lies on your lap. As it is only 65 cm long, you can work both ends of the tubes. If your amplifier is set up right, the feedback will stop when you move the mike away from the instrument, but as an added precaution, a volume/gain pedal would not be a bad idea.

Shapeways have a bounding box limit so the longest tube comes in under 65 cm, offering a flute and piccolo range. However, adroit use of neighboring tubes and/or two mikes should give you amazing roaring difference tones reaching into the sub bass.

This is my first 3-D printed pilot model which you can acquire on Shapeways if you are loaded with moolah. Sometime soon I will be looking into the possibilities of printing bent tubes to get more sounding length in a smaller space.

And maybe one with less tubes to make it more affordable. And feel free to pinch the idea, using offcuts from your local plumber.