Blow your horn, not your savings 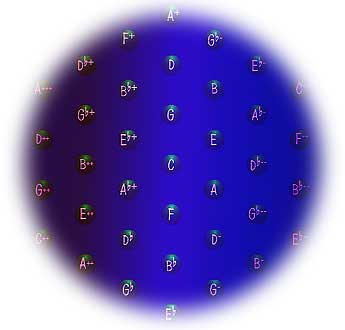 The Honeycomb, known by some as the Harmonic Table, maps notes on a hexagonal grid along three axes: fifths, major thirds and minor thirds. That’s nice, but what do you want to do with it?

Well, I used it to try to understand the fractions used by Alain Daniélou to describe the microtonal intervals of Indian Music in Ragas of Northern Indian Music. They are the basis of just tuning.

I then wrote a protocol, using tables in Paul Hindemith’s Craft of Musical Composition, to enable a computer to analyse in real time any group of notes and find the root and the most harmonic frequencies for the remaining notes, weighted by their proximity in the Honeycomb, and fine-tune the MIDI code accordingly.

This idea hit a wall, as no-one I knew was capable of coding a program that would interface with the MIDI inside a synthesizer.

Plus I wasn’t sure it would sound any good. A fellow explorer, Charles Lucy, sent me some recordings of lullabies made with just intonation, and to be kind, it took some getting used to. Not only that, I read a study somewhere that those Indian microtones are not observable in actual performance.

So, is the Honeycomb useless brainfood?

Yet another blowout sale!

The last thing I wanted to do with the Honeycomb was transform it into a keyboard design. So I was intrigued to learn about C-thru Music’s Axis-64 that had done just that! Belatedly, I should add. Because the company is planning to close down on January 31st 2015, and is selling off its inventory at 50% off.

So what went wrong?

Well looking at this video, possible reasons come to mind.

At the risk of sounding more like a post-mortem than a product review, here goes:

Firstly, the layout is logical, without managing to be intuitive. Or better put, the logic used is arcane. Our kinaesthetic perception of pitch starts at age dot with the muscles of our own voice, and is necessarily linear. We do not expect to have to jump across the board to find neighboring tones. Semitones want pawn moves, not knight moves.

Secondly, all those triads where three buttons meet are in close root position.  To me it is as if the designer has made naive decisions about the components of music. Specifically, it ignores the rich world of voice-leading harmony, like the basses of an accordeon.

Thirdly, the keyboard looks like it has been put together with off-the-shelf parts and cheap materials. And no designer input.

And this is the sad part, this passionate designer’s baby fell into the industrial production trap. An interesting idea takes the long and expensive route to becoming vintage attic junk.

You thought you had a winner and blew your savings on it. (I’m just guessing!) From that moment on, you hired helpers and became a company, dependent on takers to keep afloat. Not what you were born for, I’m guessing again.

As my regular readers (both of them!) will observe, I shouldn’t be knocking the Honeycomb layout, since I used the very same layout for my feedback-mike-driven chromatic chordal passive lap organ (not sure which order to put those adjectives in), the Honeycomium.

True, listening to that video, when I heard his last remark “Definitely can’t do that on a piano”, referring to the random omnidirectional glissandi that you can do on it, and then looked at the price this was selling for, my thought was, so is that all I get for a grand? Five minutes of MIDI free jazz?

A toy I want but can’t afford

I made the Honeycomium as an escape from MIDI, back into the analog world, to explore endless sonic possibilities – more grunge than free jazz perhaps. And if you can’t stand it after five minutes you will be left with a mathematical sculpture, at the very least.

Your microphone plays triads wherever three walls join, but the feedback loop will revoice those triads in different ways by finding the tubes’ harmonics and adding subtones. Think Hendrix’s Star-Spangled Banner and wear ear protection.

If you are clever with electronics and duct tape you could even design a microphonic glove to play it with.

And lastly, although the 3D-printed price is not a lot cheaper than the Axis-64,  I am not a company, and I’m not dependent on you buying it. So I can be upfront with you. Don’t buy it unless you are slightly mad, have cash to spare and own everything else you need already!

And my message to fellow pioneers like Peter Davies, brave designer of the Axis-64, is don’t give up, and blow your horn not your savings! One day in the distant future, ROI (Return On Investment) will be measured in musical output.